Ram Navami is a famous Hindu Festival, which marks the birth of Lord Rama at Ayodhya (India) to King Dasharath and Queen Kausalya. Lord Rama was another Avatar for Lord Vishnu and the Holy Book of Ramayana is mainly based upon life of Lord Rama and Kingdom of Ayodhya. 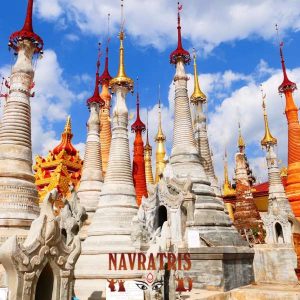 The ninth day of Navratri festival is celebrated as Ram Navami with joy and fervor, not only in India but by Hindus all around the world. It is an auspicious day, where devotees observe fasting (vrat), seeking blessings of Lord Rama. The temples are decorated and the puja/aarti is performed seeking blessings and good luck, which is followed by distribution of prasadam (sweets).