Brahmacharini (ब्रह्मचारिणी) is the second form of Goddess Navadurga of the nine forms of Hindu Goddess Durga, the second day is dedicated to her. Here Brahma means tapasya and Brahmacharini means one who does the penance.The second day of Navratri pooja is . The name comes from Brahma (penance) or strong tapasya, as she did hard penance to obtain Lord Shiva (Mahadeva) as her consort. The fasting/vratas observed by women during Navratri is a representation of great sacrifice / tapasya by this form of Durga Brahmacharini.

During the Brahmacharini or on any other day of puja, commonly the mantra is chanted and a shower of panchamrit (milk, honey, curd, tulsi & ganga jal) is given to the Goddess. After the shower, goddess is offered flowers, sindur, kumkum and rice. Then lamp is lit with pure ghee for the worship (arti) and the prayers are offered by placing a flower garland (preferably red) along her idol/image.

Having immolated herself, Goddess Sati was born to the Mountain King Himalaya & Queen Maina. Due to her ascetic & auspicious ways, she was named as Parvati. Once on sage Narada visit to the King Himalaya, sage was requested by the King and the Queen to predict the future for Parvati. On reading the palm of Paravati, sage Narada smiled and bowed her head before Parvati which made the king and queen quite curious. 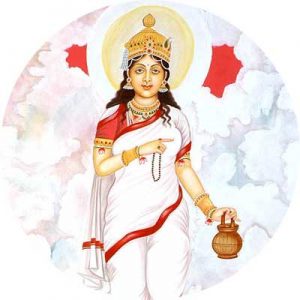 To this, sage Narada narrated the story of Goddess Sati and her sacrifice for Lord Shiva. Sage further said Sati is the one born again and blessed to you as Parvati. And she will again get Lord Shiva to be her consort.

This made Parvati enquire from the sage Narada as what she can do to have Lord Shiva as her husband and the reply was ‘severe penance’. Acting upon the sage advise, Parvati spend thousand of years to get Lord Shiva as her husband, which reduced her to skeleton like body. To this, all Gods and sage prayed to the Lord Brahma to grant Parvati her wish. The same was finally granted and Lord Brahma also restored her charm.

Brahmacharini is represented by this severe penance, clothed in white clothes holds a water utensil/kamandalu in her left hand and  a rosary in her right hand. She is also referred as Goddess of wisdom and knowledge. By worshiping her, a devotee is believed to gain qualities like patience, sacrifice, Virtue, detachment and penance.