The fifth day of Navratri is dedicated to Durga Skandamata (स्कंदमाता).  She is the fifth form of Goddess Navadurga i.e. nine forms of Hindu goddess Durga. This form of Goddess Durga sites with her son named Kartikeya (God of War) in the lap. Here Skanda is another name for Kartikeya, while Mata means mother, hence the name Skandamata. 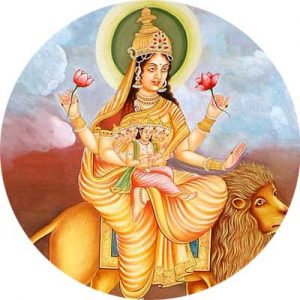 She has four arms, while she sits on the lotus and lion is also her vehicle, with one arm she holds Lord Skanda, who can be seen in her lap. With two hold the lotus flowers and with the other hand she is seen showering blessings on her devotees i.e. boon-conferring gesture.

It is believed worshiping Skandamata, purifies devotees heart, as they also get to pray  Kartikeya as well.