Navratri an important Hindu festival is dedicated to the worship of Goddess Durga. It is observed for different reasons and celebrated differently in various parts of the India with different vigour and has a different flavour altogether. There are four seasonal Navratri, however, popularly it is the post-monsoon fall festival called Sharad Navratri that is the most celebrated in the honor of the divine Goddess (Durga). The festival is celebrated in the bright half of the Hindu calendar month Ashwin, which typically falls in the Gregorian months of September and October. Celebrations include stage decorations, recital of this legend, enacting of this story, and chanting of the scriptures of Hinduism.

Navratri is a Sanskrit word, which means ‘nine nights‘, i.e. it is celebrated over nine nights. The nine days are also a major harvest season event, such as competitive design and staging of pandals, a family visit to such pandals and the public celebration of classical and folk dances of Hindu tradition. During basant ritu (months of March-April), it is known as Chaitra Navratri. While during sharad ritu, (months of September-October), it is known as Sharad Navratri. 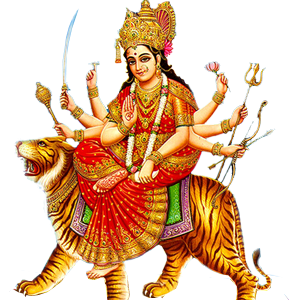 During Navratris, food served is satvik and purely vegetarian, without the use of onion and garlic. These recipes will provide you with the required combination during Navratri. Click here to know more.

Nine different forms of Goddesses are word-shipped during the nine days of Navratri, which are based on the three main forms that Goddess Durga manifests herself into: Maha-Saraswati, Maha-Lakshmi and Maha-Kali/Parvati. The nine forms namely, Shailaputri, Bharmacharini, Chandraghanta, Kushmanda, Skandamata, Katyayani, Kaalratri, Mahagauri and Siddhidatri.