Fasting or keeping Navratri vrats during Navratri is considered to be one of the most sacred ritual. That includes consumption of satvik food, fruits, milk, etc mainly during the nine days of Navratri Fasts. This Navratri fasting ritual is followed both by male and female members of a hindu family. 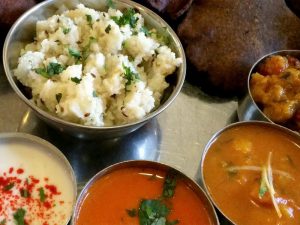 Fasting is considered to be the sacred and important ritual. People fast during Navratri as a mark of worship or as a part of a religious sacrament or some consider it as a penance. Some people fast for whole of the nine days of Navratri, while some keep vrat / fast on the first and last day of Navratris only. But one should take to fasting for whole of nine days only he/she can be very cautious as to eating habits specially, like fast food, sauces, etc are to be avoided.

The main advantage of fasting is that it can develop the qualities of detachment, calmness and composure in a difficult situation. It also helps in establishing a harmonious relationship between the body and the soul and detoxifies our body, giving rest to its vital systems.

Pertinently, there are some fasting rules that one needs to follow during Navratri:

Some delicious recipes are provided here, which you can prepare and consume during Navratris, though some of these Recipes may not be applicable to you, as per your local customs. Please check with your elders before preparing the same.

The fast is broken on the Eighth (ashthmi) day or the Ninth (Navami) day, when Kanya Puja is performed, famously known as Kanjake. During the Kanjake, the small girls are worshipped as Goddesses at home or Temples and are given gifts and prasadam. Kanjake is more famous in the Northern parts of India. If you are touring pilgrimage like Vaisno Devi, the Kanjake or kanya puja can be performed there itself or in any nearby temple also.