Navratri is dedicated to the worship of Goddess Durga. Navratri Festival is celebrated with religious fervor and gaiety over nine days in different parts of India from Punjab till Tamil Nadu and from Gujarat to West Bengal/Assam in different style but in similar spirit. In 2018, Sharad Navratri will be celebrated from 10th October 2018 till 18th October 2018, wherein each day is dedicated to the worship of different forms of Goddess Durga – Maa Shailaputri, Maa Bharmacharini, Maa Chandraghanta, Maa Kushmanda, Maa Skandamata, Maa Katyayani, Maa Kaalratri, Maa Mahagauri and Maa Siddhidatri.

Navratri an important Hindu festival is dedicated to the worship of Goddess Durga. It is a Sanskrit word, which means ‘nine nights‘, i.e. Navratri is celebrated over nine nights. During basant ritu (months of March-April), it is known as Chaitra Navratri. While during sharad ritu, (months of September-October), it is known as Sharad Navratri. Further, there are three (lesser known) Navratris celebrated during the year – Ashad Navaratri (June–July), Pausha Navaratri (December-January), Magha Navaratri (January–February).This festival brings along festivities that includes Navratri celebrations, Garba dance, special dishes and puja of different forms of Goddess Durga. Nine different forms of Goddess are worshipped during the nine days of Navratri, which are based on the three main forms, that Goddess Durga is believed to manifest herself into: Maha-Saraswati, Maha-Lakshmi and Maha-Kali/Parvati. These three avatars are wives of the Hindu trinity – Brahma, Vishnu and Rudra/Maheshwara.

Why Navaratri is celebrated ? 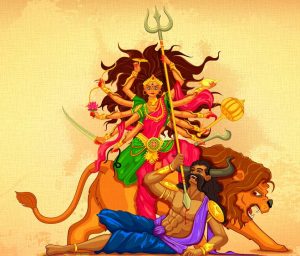 Mahishasura, asura king, was blessed with eternal life by Lord Shiva for his strong penance. He considered himself as invincible and started war of terror in the three worlds (teen lokas) and conquered the earth. Then attacked the heaven (Deva Loka) and defeated Indra, made his courtiers his slave and proclaimed himself to be the next Indra.

This caused anger among the teenlokas and the Trimurtis (three lords) – Vishnu, Brahma and Shiva combined their powers to form Durga. Lord Shiva knew that Asura was protected against Man, Animal and Gods and can only be defeated by Devi or Goddess. All Gods bestowed various powers including weapons like Trident/Trishul, Spear, Discus, Bow, Arrow, Mace, etc upon Goddess Durga. The ferocious battle between Mahishasura and Durga continued for 9 days/nights and it was only on the tenth day, Durga was able to take the form of Chandika and pinned Mahishasura down.

These nine nights are celebrated as Navratri, which ends with Ram Navmi during Chaitra Navratri. While durng Sharad Navratri, the tenth day as Vijayadashmi, the day of victory of good over evil. The same day Ravana was cremated after being killed by Lord Rama.

Major Form: Maha-Saraswati
Day 1 Puja: Shailaputri (i.e. Daughter of the mountains)
Day 2 Puja: Bharmacharini (i.e. Strong Penance)
Day 3 Puja: Chandraghanta (i.e. She carries a half moon/Chandra in the shape of a bell/Ghanta on her forehead)

Navaratri in different Parts of India

Navratri Festival is celebrated in most parts of India with joy and jubilation. The ninth day during Chaitra Navratri (March-April), is celebrated as Ram Navami, day of birth of Lord Rama. While the tenth day during Sharad Navratri is celebrated as Dussehra in different parts of India. On this tenth day, known as the Vijayadashami or Dussehra, the statues of Durga are immersed into the water bodies like river and ocean in eastern states like West Bengal, Assam, etc. On the other hand, the effigies symbolizing the evil are burnt with fireworks marking evil’s destruction in other parts of India. The festival also starts the preparation for one of the most widely celebrated holidays, Diwali, the festival of lights, which is celebrated twenty days following the Vijayadashami or Dussehra.

In Gujarat, Navratri Festival is one of the main festival in this state of India. Garba Dance, a well known form of dance, is performed in groups during all nine days of Navratri Celebrations. Celebrations include stage decorations, the recital of this legend, enacting of this story, and chanting of the scriptures of Hinduism. This period is considered very auspicious for occasions like marriages and other ceremonies. Gujarat Government also organizes “Navaratri Festival Celebrations” during these nine days of the Navratri.

In West Bengal, during the Navratris, Durga Puja is celebrated with religious fervour and has a close bearing with Navratris and Lord Rama. It is believed that Lord Rama sought blessings of Goddess Durga before starting the battle with Ravana in Lanka on Saptami day. Finally, the Ravana was killed on the night of Ashtami and Navami, while cremated on Dashmi. Particularly, the last four days of Sharad Navaratri are celebrated as Durga Puja in the state of West Bengal, India.

Durga Puja is the biggest festival of the year in the state of West Bengal and also celebrated widely in other nearby states like Orissa and Assam. The huge size idols of the Goddess Durga are setup all around the cities in pandals, temples, etc. The idols are worshipped for 4 days and immersed in water on the 5th day, similar to Ganapati Puja in the western part of the country.

In Punjab, mostly women fast during the first seven days of the Navratris. On the eighth day, the custom is to call little young girls home and worship them like goddess. The prasad includes Halwa, Puris and Chanas along with small gifts like bangles, chunni, other eatables along with small token as shagun are offered.

In Telangana, the nine days of Navratri are celebrated as floral festival by local women, the festival is known as Bathukamma. Bathukamma is a form of Goddess Durga, who is worshipped by Women for prosperity and well being, while young girls worship in the hope of getting good life partner.

In Tamil Nadu, the Navratri celebrations have it’s unique flavor, where the dolls are exhibited on steps in every house. These dolls are of gods and goddesses, also known as Golu dolls, which are placed in tiers of odd number like 7, 9 or 11. Lord Ganesha and Goddess Durga are the most famous of Golu dolls. Special marketplaces / stalls are setup in different corners of famous cities like Chennai. Special Puja is organized by the women, seeking blessing from the god. Friends & Relatives also visit each other on the occassion for darshan of golu dolls, seek blessings and are offered Prasadam.