Navratri is synonymous to Gujarat for many of us for it’s grandeur celebrations including the famous Dandiya and the Garba dance. The Navratri in Gujarat is celebrated with all it’s charm and fervor similar to what Durga Puja in West Bengal, during the nine days of Navratri. Specially in Gujarat, the first three days of Navratri is dedicated to the Goddess Durga, next three days to Goddess Laxmi and the last three to Goddess Saraswati. 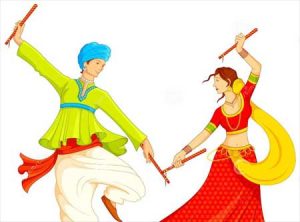 The ‘Garba’ is a gujarati folk dance, which is performed in circles around the earthen lamp and statue of god/goddesses of Sri Krishna or Durga/Shakti. The circles represent time, while it is just the god that is constant. Men and women wear colourful dresses while performing Garba, which are of bright colors like red, pink, yellow, orange. The Garba is not only performed in navratris only but also during sharad purnima, holi, basant pachmi, and on other festive occassions, though commonly related to Navratri only.

The word ‘Garba’ is derived from the sanskrit word “Grabha” which means womb and is also known as Garbhdeep, where deep means ‘earthenware lamp’, which symbolizes human body and the lamp inside represents the divine soul. The earthen lamp placed in the center of the circle, contains a coconut, betel nut and a silver coin placed within it. Garba is often confused with Dandiya, though Dandiya which is played mainly with sticks originated from Vrindavan.

The Garba dance scenes can be visualized in each nook and corner of the city. Modern day Garba is heavily influenced by Dandiya Ras dance as traditionally performed by men. The combo of both can be seen today on the streets of Gujarat, which is high in spirits and energy.