Shailaputri (शैलपुत्री) is the first form of Goddess Navadurga of the nine forms of Hindu Goddess Durga. On the first day of Navratri, she is worshipped and special pooja is organized at various places, dedicated to Shailaputri. Also on this very first day, the saints start the Yoga Sadhna, by concentrating on root chakra/center (muladhar) also known as energy centers, which is a form of meditation.

Shailaputri was born to the King of Mountains, therefore referred to as the daughter (i.e. putri) of the mountains (i.e. Shail) and worshiped on the first day of Navratri festivities. Also known as Sati, Hemavati, Parvati or Bhavani. 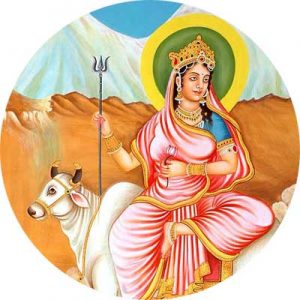 On the first day, Navratri Puja is essentially performed in all households. Sunrise is considered to be the most auspicious time for the first day of Puja. The puja items like flowers, diyas, coconut, idols, moli (sacred thread), utensils, etc are properly arranged before start of the Puja. The fire lamp (diya) is lit mostly for nine days continuously also referred as Akhand Jyot, which signifies the love and devotion for the god. All family members join the Navratri Puja and pray for the prosperity and well being of all.

Maa Shailtiputri in her previous birth is believed to have been known as Sati, daughter of Daksha (son of Lord Brahma). Goddess Sati was attracted to Lord Shiva and both got married without the wishes of Sati’s father Daksha. Once a yajna was organized by Sati’s father, where both were not invited, Sati went to yajna and immolated herself due to the humiliation of herself and here husband Lord Shiva. (read complete story here).

In the next birth, she was born as a daughter to the Mountain Himalayas, therefore referred as Shailiputri and got Lord Shiva as her consort by strong penance. She is also known as Goddess Parvati, wife of Lord Shiva and mother of Kartikeya and Ganesha. Maa Shailaputri strongly represents Mother Nature. She rides a bull and carries a lotus (kamal flower) in the left hand and trident (trishul) in her right hand. She is the Goddess of purity.