Kushmanda (कूष्माण्डा) is the fourth form of Goddess Navadurga of the nine forms of Hindu goddess Durga. The fourth day of Navratri is dedicated to her. The name is combination of three words – Ku (little), Ushma (Energy) and Anda (Cosmic Egg).It is believed that the Universe was created with cosmic egg produced by her smile, admist darkness in the Universe. 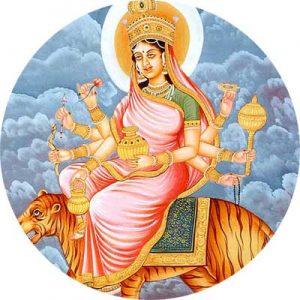 Kushmanda is believed to reside within the core of the Surya/Sun, providing energy to the sun and emitting light to the whole Universe. She is said to providing directions to the Surya, i.e. Sun God.

Goddess Kushmanda is depicted with eight hands also known as “Ashtabhuja”. She rides a lion and in her hands, she holds Lotus, Kamandalu, Chain of beads (Mala), a Jar of Nectar (Amrit), Bow, Arrow, Discus (Chakra), and Mace (Gada). The lion represents Religion i.e. “Dharma”. Worshiping her, blesses devotees with Happiness, Prosperity, Progress and Patience.

On this day, yogis/saints concentrate on Anahata Chakra. Anahata in sanskrit means ‘unstruck, unhurt and unbeaten’.