Katyayani (कत्यायनी) is the sixth form of Goddess Navadurga of the nine forms of Hindu goddess Durga. The sixth day of Navratri is dedicated to her. Katyayani takes fierce form as Katyayani, also known as warrior goddess. 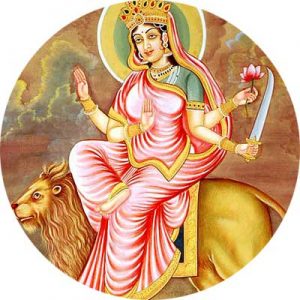 Rishi Katyayana went through severe penance to have a goddess as her daughter with the blessings from Mother Goddess. She was born to said Rishi Katyayana whom she worshiped as well, thus called Katyayani.

In this avatar, she rides a Lion and has four hands holding sword and lotus in her two left hands, while the left two hand are in Abhayamudra (a gesture of fearlessness) and Varadamudra (symbolizes dispensing of boons) respectively. She is indeed invincible and grants wishes of her devotees.

This day Yogis/Saints concentrate on Agya (command) Chakra, which is located on the forehead between the eyebrows. It helps in development of wisdom.

During Durga Puja, from this day onwards, in the state of West Bengal, specially in Kolkatta, Goddess Durga pandals are setup till its immersion of grand idols of Durga in water on the tenth day.