The seventh day of Navratri is dedicated to Durga Kaalratri. She is the seventh form of Goddess Navadurga among the nine forms of Hindu goddess Durga/Shakti. She has dark complexion like night (ratri) darkness (black), that’s whay called Kaalratri. 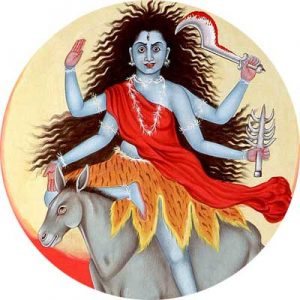 Kaalratri is considered as most ferocious form of Goddess Durga / Parvati. She represents dark side of life and is also known as a destroyer of bad times. She assures devotees freedom from fear and troubles.

Kaalratri has three eyes and four hands. She rides a Donkey. In her four hands, she holds a torch, an axe and the other two in mudras of protecting and giving.

This day, saints concentrate on sahasrara chakra, that is located at the crown of the head.